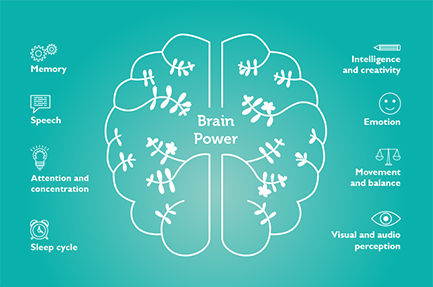 The Importance of Brain Health
It may sound extraordinary, but the human brain is the most complex known structure in the universe.   It contains hundreds of billions of cells interlinked through trillions of connections.  Which reflects the importance of the brain in body functions.  The brain is the command centre of the central nervous system and it is connected to every part of the human body via a complex system which includes the spinal cord and nerves.  This provides a network of connections, signals, and feedback so that the brain can continually monitor the body, respond, and issue commands for optimal function.  However, the brain is not just the chief controller but also provides intelligence, learning, memory recall, besides creativity, emotion, movement and balance, speech, visual and audio perception plus sleep.  A key signalling neurotransmitter is acetylcholine, which plays a pivotal role in brain function, especially surrounding learning, memory, judgement and the use of language.

The brain can be at risk of several diseases such as dementia, Parkinson’s disease and mental and neurological conditions.  It is also the most energy demanding organ in the body, so its function will soon respond to poor- or under-nourishment.  Subsequently poor nourishment and low brain energy production can be a manifestation of impaired cognitive function.  Ultimately, it is important to nourish the brain and minimise toxin exposure as a preventative step.

Top nutrients for brain health
For a long time, the role of nutrition in mental and cognitive health was overlooked.  However, now, as more is known about brain health, the importance of supporting the brain via nutrition is an up and coming focus that is recognised by healthcare professionals.

A healthy nourished brain is linked to lower feelings of stress, improved moods, focus, and memory. Making simple changes to the foods you eat can have surprising benefits.  The following nutrients are key to supporting brain health and function:

B Vitamins – These water-soluble vitamins play a vital role in brain health.  Firstly, B vitamins play an essential role in energy production and the brain requires a lot of energy to function properly. Additionally, vitamins B6, B12, and folic acid are involved with recycling a compound called ‘homocysteine’, which in large amounts is associated with cognitive decline.  Certain B vitamins are also required for the formation of neurotransmitters, these are signalling agents which is how the brain sends signals and communicates information with the rest of the body.

Iodine – Iodine is a trace element found in seaweed, fish and seafood.  Maternal iodine intake has been strongly linked to cognitive development and IQ levels in children.  Subsequently, low levels or deficiency during pregnancy is associated with a reduced IQ and cognitive development in the child.
Additionally, Iodine plays an important role in thyroid health as well as aiding growth and brain development.

Phosphatidylserine – This is a fatty substance known as a phospholipid which encapsulates the cell to act as a signalling interface.  It plays a key role in the activity of neurotransmitters, including acetylcholine, serotonin and dopamine and it appears to have a trophic (growth supportive) effect on the brain, which explains its major area of interest – age-related cognitive decline.  Scientists have explored the effects of phosphatidylserine on the brain and numerous clinical studies have revealed important benefits in cognition – especially those functions that tend to decline with age, including memory, learning and concentration, at a daily intake of around 200mg to 300mg.

Choline – Rich in foods such as eggs, poultry and dairy foods, choline belongs to the B vitamin family and it is a source of methyl groups needed for many steps in metabolism.  The body needs choline to synthesize two major phospholipids vital for cell membranes and of particular importance for brain structure and health. Choline has shown to be essential for cognitive health as it acts as a precursor to the neurotransmitter acetylcholine required for nerve transmission and functioning of the brain.  In a community-based population study, results revealed that those with a long-term higher intake of choline in the diet had better cognitive performance.

Omega 3 – The omega 3 essential fatty acids found in fish oil and marine algae are in a specific form that are beneficial due to their interruption of the inflammatory cascade and contribution to cell structure.  Evolutionary evidence suggests that a good supply of these fats in our diet was essential for the development of our unusually large brains; the problem is that our modern diets are often lower in these types of fats.  It is estimated that the average intake of omega 3 from eicosapentaenoic acid (EPA) and docosahexaenoic acid (DHA) is around 250mg per day and only one in four people consume any oily fish at all.  The Scientific Advisory Committee on Nutrition recommends a minimum intake of 450mg from EPA and DHA daily.   A low intake of omega-3 essential fatty acids has been implicated in a wide range of mental health issues because these fats make up a significant portion of the lipid fraction of the human brain and play important roles in many neurological functions.

Brahmi – Also referred to as Bacopa monnieri is an adaptogenic herb that has been used traditionally to boost longevity and enhance cognitive function.  Brahmi is commonly grown in Asia, predominantly in India, Nepal, Sri Lanka and Vietnam, in wet tropical environments.  Brahmi has a rich history in Ayurvedic use and shows promise in exerting memory-enhancing and anxiety-reducing effects in contemporary research, which gives it the reputation as a nootropic.  Brahmi’s memory-enhancing properties have been attributed to the presence of saponins, namely bacosides A and B.

Zinc – Zinc is a trace element that is enriched in the brain and plays a key role in the transfer of messages from the brain to the central nervous system and back.  Zinc is considered essential for brain development and function throughout the life phases.  It is suggested that insufficient zinc may contribute to lowered learning ability, apathy, and lethargy.  Evidence shows that mental health conditions may be related to zinc status.  Subsequently, zinc treatment has been shown to be effective is some cases.  In addition, zinc is considered the gatekeeper of the immune system and so regulates inflammation thus adequate dietary zinc is considered to exert an anti-inflammatory effect.

Iron – The brain has a large requirement for iron due to its role in several brain functions.  Iron is known to play a role in energy production, nerve coating and in the production of the brain’s signalling agents, neurotransmitters.  In tissue iron binds an iron specific protein and it is stored in brain cells, brain-specific immune cells and signalling agents.  It is suggested that cognitive ability is increasingly associated with greater iron concentration through late adolescence and young adulthood.  An imbalance of iron is suggested to be damaging and that during ageing a continued imbalance may contribute to age-related neurodegenerative diseases.

Bilberry – Bilberry berries are a rich source of proanthocyanidins. Proanthocyanidins are highly pigmented compounds that are known to exert antioxidant and blood glucose regulating effects.  Poorly managed blood glucose and elevated oxidative damage are some contributions to cognitive impairment.  Therefore, it is considered that a diet abundant in proanthocyanidins may offer a protective effect against age-related neurodegeneration.

Conclusion
In brief, nutrition is an essential element of optimising brain health.  The brain does not only require calories for energy but a host of vitamins and trace minerals to support energy production and brain function.  We can take memory and learning for granted in our younger years but with age these functions may decline.  Having an awareness of which nutrients are necessary to preserve memory and learning is essential and these can be included in the diet as food or food supplements.

For more information come into store or contact us on 0208 343 1002
The information contained in this article is not intended to treat, diagnose or replace the advice of a health practitioner. Please consult a qualified health practitioner if you have a pre-existing health condition or are currently taking medication. Food supplements should not be used as a substitute for a varied and balanced diet.